Nearly half of all mental illnesses have their origins in the early childhood years of the affected persons. In adulthood, these often emerge as chronic illnesses with negative consequences for the individual’s social life, economic productivity, and quality of life.

Heather Foran, what kind of problems do the children have that are at the centre of the intervention programme “Parenting for Lifelong Health”?
For the purpose of data gathering, we conducted interviews with parents of 2- to 9-year-old children. The focus is on social behavioural disorders such as the oppositional defiant disorder. Within their given environment, these children grow up with a certain risk and in many cases, they have already demonstrated conspicuous behaviour. Understandably, these difficulties cause the parents stress. The approach adopted by the programme is to work with families in a positive manner: In this way, the parents gain relaxation skills, stress management skills, communication tools, and much more besides.

What is the programme’s underlying idea?
There are many types of intervention that strive to use the work with parents as a means to prepare for children to grow up mentally healthy. The problem is this: Many of these programmes have complex license terms that are often associated with high costs. Consequently, the World Health Organization (WHO) has worked with numerous universities including Oxford and Cape Town to develop an alternative, which can be deployed specifically in the so-called low and middle income countries. The aim is to reach a greater number of people – covering the rural poorer regions as well – than is possible through the other programmes. The intervention has now been launched as a pilot project in Macedonia, Moldova and Romania.

What is your role?
We will be carrying out the accompanying research. Jointly with our partners we are responsible for the data management and data analysis processes. Our primary concern is to find out whether this intervention will have a long-term effect. We also hope to discover to what extent it (still) works efficiently. Particularly in countries such as these, the costs involved are a decisive factor, and it can make a real difference whether five or ten group session are needed to create an impact.

Are the involved parents open towards these kinds of interventions? After all, we are talking about very private problem areas in many cases.
I believe that this is a crucial questions, especially as it concerns a great many of these interventions. There is a huge gap between what is needed and the reach that such programmes tend to achieve. In the case of this programme, we discovered that it was not difficult to recruit families. Fundamentally, most parents want to be good parents. When they come up against difficulties, they are usually willing to accept help. It is important, however, that the support systems are designed in such a way that they can be accepted: they must not patronise, they must not stigmatise, and they must fit into the lifeworld of those affected.

Would you say that building trust is essential?
Yes, and this is especially true for the countries where this programme is currently being offered. Romania has a disastrous history as far as the out-of-home care of children is concerned. Here, it was particularly important to convince the parents that the work conducted within the scope of the programme is on “safe” ground. Our data shows that, prior to the intervention of the programme, many parents had never had the opportunity to discuss the conflicts and difficulties happening in their families in anything close to professional surroundings.

Looking beyond the concrete programme: From a general and international perspective, what is the approach to prevention and the gathering of risk factors in relation to psychological symptoms in children?
We know that integrated cooperation between general practitioners, paediatricians, school psychologists and other mental health care providers is essential to achieving good prevention outcomes. The more counselling and support are made available to families, there more problems can be prevented later on. As far as the health system is concerned it is also important to bear in mind that interventions that start later during the years of childhood and adolescence come at a greater cost. Basically, in my estimation, even in countries such as ours, we do not screen sufficiently for various risk factors – problems with alcohol, depression among parents, etc. – to be able to provide appropriate offers at an early stage.

The pilot-tested programme in Southeastern Europe is currently limited in its geographical scope. Is it possible to roll it out more extensively?
It is the aim of our accompanying research to generate data for the further development of the programme, so that it can also be deployed elsewhere – perhaps even more efficiently. For this purpose, we will also be taking a close look at the implementation process.

Heather Foran studied clinical psychology at Stony Brook University, New York. Prior to her appointment as full professor at the University of Klagenfurt (she initially started here with a short-term professorship in 2016) she worked as lead scientist on a DFG-funded project at the Technical University of Braunschweig. She held a position as visiting professor for clinical psychology and psychotherapy at Ulm University from 2014 to 2015. Heather Foran is a certified psychological psychotherapist in Germany and the USA. Her research interests include family and health, violence in families, parenting, healthy partnerships, depression, behavioural interventions, and public health. 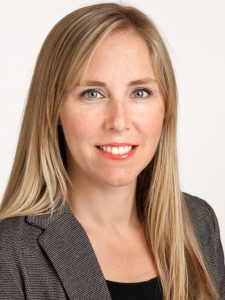 Programme for the mental health of children in Southeastern Europe

The project funded by EU H2020 is carried out as a cooperative effort involving nine institutions from eight different countries. It focuses on the prevention of mental illness during childhood. RISE (Prevention of child mental health problems in Southeastern Europe – Adapt, Optimize, Test, and Extend Parenting for Lifelong Health) aims to establish a systematic empirical process, which can be used to study the implementation, dissemination and sustainability of the parental counselling programme.

The basis for the research is the intervention programme “Parenting for Lifelong Health” (PLH) that has been specifically developed for framework conditions with limited resources and that has already been tested in other low and middle income countries. The research team will be conducting studies in three of Europe’s poorest countries located in the continent’s south-eastern regions.

The team based in Klagenfurt is taking the lead in the area of “assessment and data analysis”. Working closely with partners at the Technical University of Braunschweig and the University of Oxford, the Klagenfurt team will also support the overall project management.

10 Years of eLearning at the AAU

When will we (finally) choose a better world?