A happy day for the Application Engineering Research Group: After four years of intensive research work, our team member Suneth Ranasinghe successfully defended his dissertation – with excellent evaluation by the jury!

Within his thesis, Dr. Suneth Ranasinghe shows the power of Domain Specific Modeling for developing digital ecosystems. As such, the dissertation is an important contribution to the field of Application Engineering and an important building block in the framework of the “model-centered architecture” paradigm developed by the research group.

We congratulate Suneth and look forward to continuing our excellent cooperation.

The Peter P. Chen Award honors one person each year for his or her outstanding contributions to the field of conceptual modeling. The winner of the 2018 award is Prof. Veda Storey from the Georgia State University in Atlanta, USA.

Veda Storey has been actively involved in the conceptual modeling community since completing her Ph.D. dissertation on automating conceptual modeling. Her research addresses conceptual modeling in data semantics, reverse engineering, ontology and big data modeling. She has published many well quoted papers in various journals and conference proceedings in both the information systems and the computer science areas. Currently, Google Scholar names 8.402 citations of her publications; the most cited one is the paper “Business intelligence and analytics: from big data to big impact”, published in MIS quarterly in 2012. 16 of her papers appeared in Data and Knowledge Engineering, which is the premier journal associated with the ER Conference; another 16 appeared in the ER conference proceedings. In addition, her contributions to education and practice are outstanding.

With respect to the International Conference on Conceptual Modeling, she has served as the co-chair of the ER Conference three times and in many other functions. She received an ER Fellow award in 2013. Since 1999, she has been a member of the ER Steering Committee as well as a member of the editorial board of Data and Knowledge Engineering.

The award was presented by ERSC Chairman Heinrich C. Mayr at the ER2018 gala dinner in Xi’an, China, October 24th, 2018.

On behalf of the ER Institute and the ER Steering Committee, we are pleased to solicit nominations for the 2018 Peter P. Chen Award.

Initiated by Elsevier in 2008 to celebrate the 25th anniversary of the journal, Data and Knowledge Engineering, the Peter P. Chen Award honors one person each year for his or her outstanding contributions to the field of conceptual modeling. The winner will receive a plaque and a prize of $2.500 sponsored by Elsevier Publishing Company.

Criteria for the Award:
• Research: how well the nominee has helped advance the field of conceptual modeling with his/her intellectual contributions.
• Service: participation in the organization of conceptual-modeling-related meetings and conferences and participation in editorial boards of conceptual-modeling-related journals.
• Education: how effectively the nominee has mentored doctoral students in conceptual modeling, produced researchers from their labs, and also helped mentor young people in the field
• Contribution to practice: the extent to which the nominee has contributed to technology transfer, commercialization, and industrial projects.
• International reputation: the extent to which the nominee’s work is visible to and has diffused into the international community.

Nominations:
should be sent by May 28th, 2018, to the ER Steering Committee Chair Heinrich C. Mayr [heinrich.mayr@aau.at] and Vice Chair Carson Woo [Carson.Woo@sauder.ubc.ca], who will manage the selection process. Each nomination should be accompanied by a summary statement about the nominee and a justification for the nomination. Based on the criteria for the award, the selection committee will select the best candidate among the nominees. Selection committee members and the ERSC chairmen are not eligible for the award.

In this issue of the EMISA Journal, 76 renowned authors, many of whom have been companions of Heinrich for many years, wrote 26 articles on topics ranging from the basics of conceptual modelling, petri nets, business processes, ontology-based modelling and software engineering to database and application engineering.

The bound ‘first edition of this commemorative publication’ was handed over to Heinrich at the evening event of the conference “Modellierung 2018″  at the premises of the Alstadtrathaus Braunschweig, the Dornse (see photo: Heinrich C. Mayr with one of the editors Judith Michael). 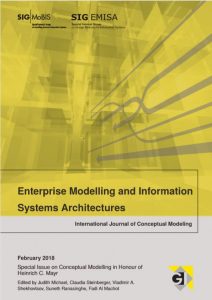 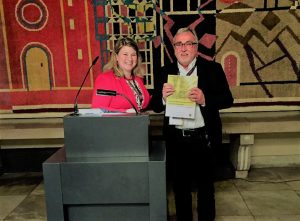 The EMISA Journal (Enterprise Modelling and Information Systems Architectures – International Journal of Conceptual Modeling) is a peer reviewed Open Access Journal focusing on new and innovative approaches to conceptual modeling and its application.

Congratulations: With March 1, Judith Michael will take up new challenges at the Department of Computer Science 3 of RTWH Aachen (Prof. Dr. Bernhard Rumpe).

We thank her for all her contributions and dedication to research, teaching and the organization of great conferences, and we wish her success and all the best at the new position.

Clearly, in the scientific world, Aachen is nearby, so that we are looking forward to an on-going intensive cooperation.

Title: A DSML for Observation Interfacing